Jump Straight to the Story

Much like many authors, I find a lot of joy in worldbuilding.  There’s just something so satisfying about creating a setting and filling it up with all sorts of interesting things.

Part of the joy in worldbuilding is developing beings to populate one’s world, as well as the cultures that they live in.  In mainstream fantasy, a handful of non-human peoples are commonly portrayed, such as elves, dwarves, and orcs. While some might say that those races seem a little overdone (especially when our world is packed full of other fascinating mythology to draw ideas from), many of us encounter our first taste of fantasy through Tolkien-inspired works.  And sometimes there’s just something comforting about indulging in old favorites!

The fantasy universe that the following sketch comes from is one of my personal favorites, and I would be very surprised if you didn’t see more here eventually.  Please enjoy this little peek into a fantasy brothel from a first-person perspective.

And in case it wasn’t clear—this story is meant for 18+ readers only because of sexual content! 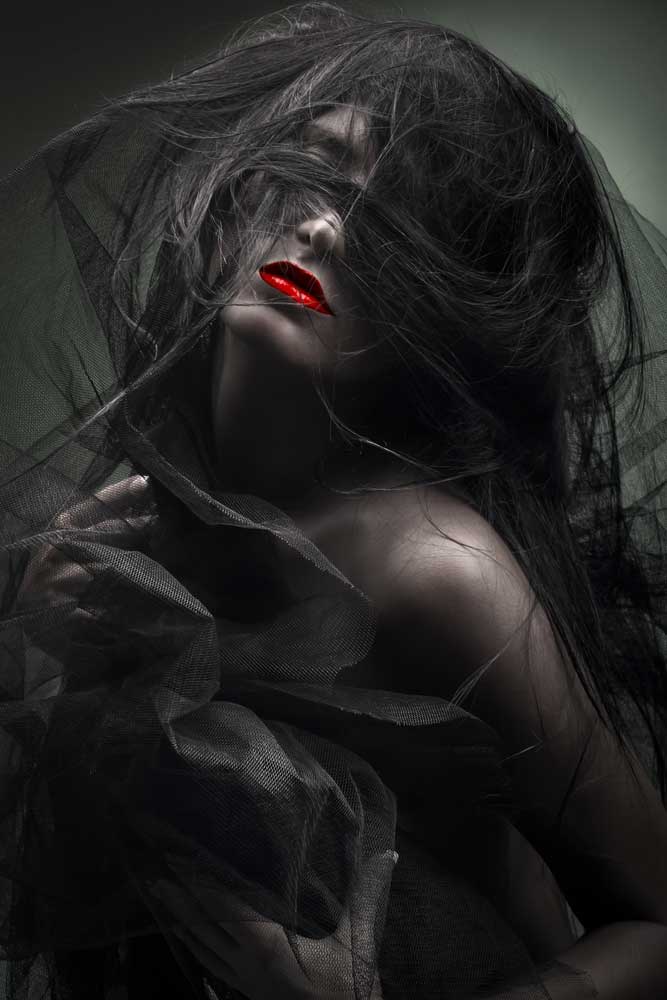 Your companions laugh and jeer at the lithe figure barely covered in gossamer spider silk, but you can’t draw your gaze away from her lips.

Plump, delicately curved, and dyed a rich red that reminds you of ripe strawberries, they beckon potential customers with the faintest of smiles as the elf dominates the stage with her lascivious dance. Her bare feet slide across a wooden floor polished by countless hours of dancing while her hips rock and gyrate in a way meant to tempt even the most chaste of men. The elf’s clothing is little more than a sheet of near-transparent silk draped artfully over her curves; she knows how much of her body lay on display and flaunts it, unafraid to let the cloth slip and reveal more intimate places before nonchalantly sliding it back into place.

The heavy thud of the accompanying drums sounds faint next to the pounding of your heart, blood rushing through your increasingly excited body as you drink in the sight of her.

Elven females don’t dance in public, especially not in brothels barely disguised as taverns, but this one does. The few you’ve seen in your lifetime were always subdued, surrounded by a group of protectors and conservatively clad in layer upon layer of finely-woven clothing with their hair neatly covered, in a way meant to dissuade the eyes of the “lesser” races.

This one wears her raven tresses long and loose, a dark cloud of silken waves that contrasts with her pale skin and the sinful red staining her mouth. Her tall, delicate form moves with almost supernatural ease, arching and twirling and filling the space as if unable to stay still. Long, expressive ears grace the side of her head, and her large, almond-shaped eyes seem unfazed by the dim tavern light. She’s gorgeous, a priceless jewel set in a pauper’s ring, and you can’t help but want her.

No female you’ve ever seen has ever moved with such grace, openly flaunting her sexuality for anyone willing to look at her.

Those lips part as the tip of a pink tongue darts out, swiping them with a smear of moisture, and you realize then that you’ve been caught staring. The elf saunters closer to the edge of the stage, closer to you, a hint of amusement shining in her amber eyes. Just out of reach, you imagine that you can almost feel the heat radiating from her skin, maybe even see a trickle of sweat glistening at the curve of her neck and threatening to slide down to the cleft between her ample breasts. Raising her arms over her head, she turns in a slow circle and showcases her luscious curves to your hungry gaze, shamelessly flaunting herself before your eyes meet again.

Those eyes are liquid heat, burgeoning with the promise of hedonistic delights to those lucky enough to find themselves in her embrace. She maintains your gaze as she crouches, balancing on one hand with her knees spread and only a thin veil separating you from the sight of raven curls. Her lips part in the facsimile of a silent moan as her dark eyelashes flutter, and she arches her back, thrusting rose-tipped breasts towards you in blatant invitation. This close, you can see the way they pebble behind the silk, as if eager for your touch.

You suck in a sharp breath, the faint stirrings of arousal in your gut blossoming into full-on lust.

The catcalls at your side grow only louder, but you can’t be bothered to look at your companions nor any of the others in the audience, not with this ravishing beauty only an arm’s length away. You ache to reach out and touch her, to feel the slide of silk and skin beneath your fingers, but the last thing you need is to be kicked out of the tavern for sampling the merchandise without paying. Instead, you force your hands to remain in your lap, trying your best to ignore the almost painful tightness of your trousers.

You’re surprised to see a flicker of interest in the elf’s pale eyes as her gaze slowly drags over your stiff form, lingering on the shadows cast over your lap by the edge of the table before snapping back to your face. The fingers of her free hand trace the edge of her jawline and then drift lower, following the curve of her breasts and down the flat plane of her stomach to settle just below her navel. The elf grins, her teeth sharp and white.

There’s a feral sensuality to her that you’ve never seen before on any female, and it only fans the flame of your desire.

Boldly staring you down, she catches her lip between her teeth just as her hand curls over her mound, an unabashed shudder running through her body at the contact. The elf casually strokes herself while the audience goes wild around you, but you can’t possibly focus on them, not when she’s looking at you like she wishes it was your hand making her shiver. You can see her fingers moving, swirling, flicking, while her breath comes faster and faster, a deep flush creeping up her neck and down over her heaving breasts.

She’s pleasuring herself right in front of you, and all you can do is watch.

You want to grab her hand and force it to your nose, to inhale the warm, musky scent of her sex, to lick the moisture from her fingers. Nine hells, you’d push her down over the edge of the stage and take her from behind if given the opportunity, the crowd be damned, and you’d swear that she knows it, too.

It’s impossible to hear her over the roar of the crowd, but there’s no mistaking the way her slim body quakes as she climaxes. She finally stills, her gaze locked with yours, and she holds pleasure-slick fingers up for you to see.

You nearly lose it right then and there.

Your view of the world around you narrows as you stumble to your feet, desperate to find the madam and press a few coins into her eager palm.

The elf stands and returns to the center of the stage, though not before casting one last smoldering look at you over her shoulder. Her plump, ripe lips curl in a knowing smile.

Like most sites on the internet, we use cookies to ensure that you get the best experience on our website. But your information is never shared or sold.

This website uses cookies to improve your experience while you navigate through the website. Out of these, the cookies that are categorized as necessary are stored on your browser as they are essential for the working of basic functionalities of the website. We also use third-party cookies that help us analyze and understand how you use this website. These cookies will be stored in your browser only with your consent. You also have the option to opt-out of these cookies. But opting out of some of these cookies may affect your browsing experience.
Necessary Always Enabled
Necessary cookies are absolutely essential for the website to function properly. This category only includes cookies that ensures basic functionalities and security features of the website. These cookies do not store any personal information.
Non-necessary
Any cookies that may not be particularly necessary for the website to function and is used specifically to collect user personal data via analytics, ads, other embedded contents are termed as non-necessary cookies. It is mandatory to procure user consent prior to running these cookies on your website.
SAVE & ACCEPT